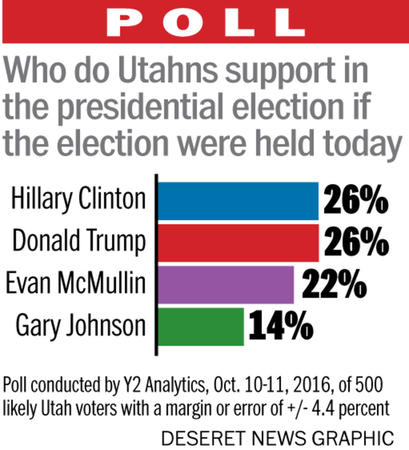 Utah is leading the way for republicans who can’t stand Donald Trump AND Hillary Clinton.  A recent Deseret News poll showed Trump, Clinton, and relative unknown Evan McMullin in a statistical tie!  This poll took the statisticians at FiveThirtyEight.com by surprise, and they promised “We’re going to be adding McMullin to our model in Utah — give us a day or two on that. But in the meantime, we could also really use another poll or two of Utah to confirm or contradict this result.”  They also posted an article describing McMullin’s longshot to win the White House.  (Incidentally, a new Monmouth University poll put Trump ahead of Clinton 34-25% with McMullin coming in at 20%.)

Many have asked what’s up with Utah, a solidly republican state.  Jake Tapper of CNN asked “When did Mormons leaders became stronger in Jesus Christ than Christian leaders?” and an Evangelical explains why! (skip ahead to the 3:00 mark if you want to hear the question and answer.)

It’s truly amazing to me that so many republicans were so concerned about Bill Clinton’s affair with Monica Lewinsky, but now that Trump is their guy, suddenly these comments are brushed off.  I have always been a Jon Huntsman fan, but was ashamed of him when he endorsed Trump back in May.  After last week’s audiotape of Trump discussing trying to have sex with a married woman, Huntsman, along with Utah Congressmen Jason Chaffetz and Chris Stewart, and governor Gary Herbert pulled their endorsements of Trump.  (Utah Senator Orrin Hatch is still endorsing Trump.  At least Senator Mike Lee said Trump “scares him”, and Congresswoman Mia Love have refused to endorse Trump all along.)   Better late than never, but what were these “leaders” thinking in endorsing Trump in the first place?

So who do you vote for if you can’t stand both Trump and Clinton?  Could BYU graduate Evan McMullin fulfill the White Horse prophecy by denying both Clinton and Trump the presidency and getting elected in the House?  I seriously doubt it.  Whom will you be voting for?  Why?

One comment on “Utah: Is McMullin Fulfilling the White Horse Prophecy”