Birth of the Devil

Abraham is known as the father of monotheism.  Growing up in a culture of polytheism with both good and bad gods, Abraham declared that there was only one god, YHWH. 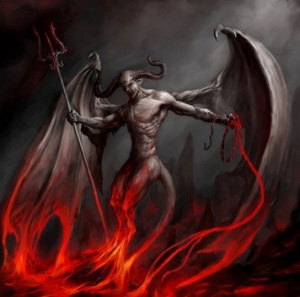 Egyptologist Kara Cooney has narrated a Discovery Channel series (now on Youtube) has said that archaeological evidence has shown that ancient religions have always been polytheistic, believing that gods had both good and bad characteristics.  (Hinduism pre-dates Judiasm, for example, and some Hindu temples have been dated to 7000 BC, and some claim it might be 20,000 years old.)  However, when people began to be monotheistic, specifically around 3000 years ago, monotheistic believers not only believed in a single God representing all that is good, but made Satan a single individual, encompassing all evil.  Polytheistic gods became personalized in a single devil, rather than countless devils, representing all aspects of evil.  She said,

No one knows exactly when or where the iconic images we recognize as the devil first appeared but menacing behaviors and physical traits were adopted from a variety of earlier gods, features like the split hooves of the Greek god Pan, the horns of both Pan and the storm god Baal, the pitchfork of the Roman deity Neptune, and the forked tail of the Egyptian god Seth, all features embodies of the modern image of pure evil, Satan.

Christianity seems to have adopted this feature of Judaism, telling ancient Roman citizens that the paganistic gods they worshiped were really representations of Satan.  While I certainly recognize the differences between polytheism and monotheism, I hadn’t thought about a mono-devil being a feature of monotheism.  From Kara’s perspective, a single devil is a quite modern invention, in archaeological terms.

She also interviews a Muslim scholar.  In the Koran, the devil is not represented as a serpent, but instead in human form.  In the garden story, the devil tempts both Adam and Eve simultaneously.  The bible seems to indicate that Even was deceived and tempted Adam, but in the Koran, they share equal responsibility for sinning.  Of course Islam is a quite modern religion, being founded 600 AD, and they seem to have jettisoned some of the more mythical parts of the garden story.