Stuff they don't talk about in Sunday School
5 Comments

I’m a few weeks late with my recap of Sunstone.  The one thing about Sunstone is that you can find all kinds of different sessions, both pro and anti church.  People seem to concentrate on the anti-church presentations, but there are some others I would like to talk about.  The people I have highlighted below bore amazing, strong, powerful testimonies and I would like to dedicate this post to them and their good example to all of us.

Ed Smart headlined a group of people who are working to help sex trafficking victims.  The session started with a song and a prayer (unlike some of the other sessions), and Ed briefly discussed some of the experiences of his famous daughter Elizabeth, recounting a time when Elizabeth was cornered in a church bathroom by a woman who asked questions like “You loved Brian David Mitchell, didn’t you?  You miss him, don’t you?”  Ed was furious with this woman’s interrogation of his daughter.

On the one hand, Ed realizes now that his family’s life prior to Elizabeth’s abduction was a charmed life.  In many ways, he misses that charm.  But life for many isn’t so charmed, and his life has changed immensely to help those in great need.  Ed is now part of a group called Operation Underground Railroad.  It helps victims of sex trafficking throughout the world.  The group was founded by a former CIA operative who wanted to help non-American citizens get out of the sex trafficking trade.  Many of these women and girls had been kidnapped and forced into prostitution.  As a CIA agent, the founder was told he could only help American citizens, not foreigners, and he felt horrible.  Ed said these are ugly problems, and we need to shine a light on these horrible experiences of these young girls and women.  It was an uncomfortable topic, but the group is truly a worthy cause.

I really enjoyed the “Why I Stay” session, and some powerful testimonies were borne.  Gina Colvin, bore a wonderful testimony.  On the one hand, she said she stays in the church because they haven’t kicked her out yet.  She seems to have a welcoming ward in New Zealand, and she said “No leaders want to get rid of me.”  Her Stake President asks her to be nice, and she feels she has won the lottery on inclusive leaders.  She also wonders if they are a bit worried she will blog about them.  Gina hosts A Thoughtful Faith, and teaches Sociology in New Zealand.

Ken Driggs is an attorney from Atlanta, and lately has been a public defender focused on capital punishment appeals.  He has previously published a book on fundamentalist Mormons.  I think the title was something like “Evil among us: Texas Mormon mission murders.”  Ken was a wonderful surprise and gave me a lot to think about.

Ken Driggs. This screen grab is from an interview on CBS in which he says that Texas officials botched the raid on the FLDS compound.

He has represented murderers.  He powerfully said that those of us in the comfortable middle class think that if we work hard, God will help us.  However, in defending some of these people, he felt that God had abandoned some of them when they needed the most help.  Some of these people live a nightmare for years at a time.

I was most impressed with his story of a woman he represented.  She had been forced into prostitution as a teen and had lived a toxic life.  Her pimp ordered her to kill 3 johns in 24 hours, which she did.  She was caught and sentenced to 3 consecutive life terms.  In some ways, jail has been a respite for her from the violent nightmare of  her life prior to prison.  Unlike Elizabeth Smart’s triumphant return, God seemed to have abandoned this woman at a similar age.

Ken concluded by saying that he doesn’t believe those with poor life circumstances made bad choices in the pre-mortal life.  We have an obligation to improve the lives of others.  He stays in church because “church makes me a better person” and he wants to make the world a better place.  He can’t imagine being out of the church and will always be a Mormon.

Kalani Tonga, from her playing days at BYU (I tried to find a Utah photo, but no luck…..)

Kalani is a single-mom, and one of the founders of a new website called FEMWOC – Feminist Women of Color.  She told everyone that she had played volleyball for the University of Utah for 2 years, and then transferred to BYU in order to play with her sister.  (Since Sunstone was hosted on the U of U campus, this revelation was met with consternation among the crowd.)

She always wanted to have many children.  When she was pregnant with her oldest child, her husband went to prison for 6 years. (She did not say why.)  After he returned, she had 4 more children, before he returned to prison again.  These were dark days for her.  She said she wanted to curse God and die like Job, and recalled flipping God the bird after an especially difficult day when her children barfed on each other.

She has thought of leaving the church, but when she does, images of her friends/family pop into her head.  Sometimes she wonders if they love church more than her.  She doesn’t want to be thought of as someone they love, “even though” she is not active/a good example/or not enough.  She said she stays because “God calls me to be Mormon.”

She also recalled times she felt love from her ward.  People helped when baby was in NICU.  The ward called and asked to help her every Tuesday from 1-3 pm.  That’s what church is about.  She has been on inside and outside.  She stays for community, and wants to belong to body of Christ.  She want others to feel same way and wants to be a difference to body of Christ.

She said that everybody walks their own path: some inside and some outside church.  She loves the gospel, and hopes to bridge the gap between insiders and outsiders by making things better.  She want brothers and sisters to feel loved.  “That is why I stay.”

Mitch Mayne was recently interviewed at Wheat and Tares.  He is an openly gay man in the Bay Area of California, and has recently served as Executive Secretary in his ward.  His ward has been very welcoming to him and told him “You belong here.”  He feels loved and safe in his ward.

He is often asked, “Why don’t you leave?”  It’s an understandable question.  In one sense, leaving is easier because he is viewed as “other.”  Being Mormon is not what we practice for 3 hrs Sunday.  Mormonism is not merely a religion, but culture that embeds itself in our DNA.  It affects what we eat and drink, the clothes we wear, the movies we watch, our money, college, university, and careers.  It affects our relationships with family, friends, and spouse.  It is in our spiritual DNA.  Extraction of DNA would leave a hole in our identity.

Staying inside the faith when you don’t fit the mold is tricky.  It takes work to remain committed when message is you don’t belong.  Instead of answering “why I stay”, Mitch cheated and answered “how I stay.”  He gave 4 principles to navigate a religion where you don’t seem to fit.

This is how he can stay.  He has a firm testimony of the gospel and a firm conviction that all are equal.  He doesn’t believe our job is to condemn others.  Celebrate joys, and lend a hand. God never scolds, shames, or condemns.  “I’m imperfect.” 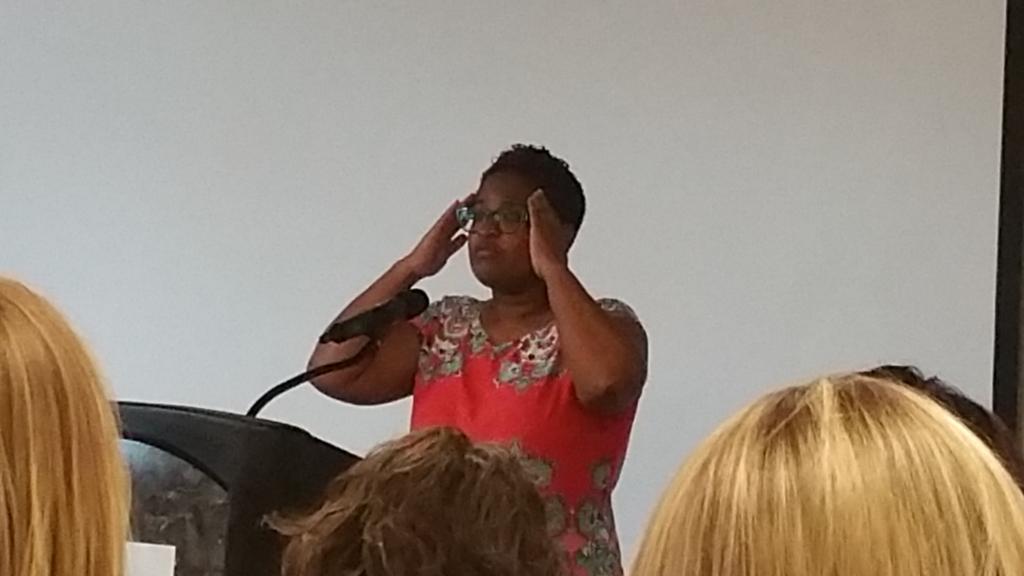 All of the speakers for this “Why I Stay” session were fantastic, but Fatimah was especially powerful.  She is currently earning a Master of Divinity degree at Duke University.  She has a Puerto Rican/Malay mom and a black dad.

She has loved this religion deeply.  Mormonism was her introduction to Jesus, as well as her introduction to service.  As woman of color, she has felt a call to preach her entire life, and never felt so rejected as when she joined the LDS Church and learned she could not live this call in these ranks.  She has had enough with the struggle of blacks and the priesthood, but she is a woman, and feels called as a preacher.  “How marginalized can I be?”

She is working on staying.  “I don’t know if what I’m doing is staying.”  She hasn’t been in pews for a while.  She had 3 sons, then a daughter.  The children were blessed by her husband in the circle, and she wanted to be there with them. She says the only days she curses is on Sundays when getting the kids to church.  “Have you ever tried to find your child’s missing shoes?!!!

“If I get my family there, are you going to preach life?  You better.”  Black children need to defy the odds and stop the school to prison pipeline.  Church needs to speak to children.  Bear them up.  Don’t just add to the problems.  She is tired of authorities lynching kids, whether they are gay, brown, or women, and then don’t apologize.  Yes she asks hard questions.  She asks these questions of God, society, and church.  She deeply loves the Book of Mormon.  “What does my stay look like?”

It looks like “me at Sunstone.”  She write sermons about how the Book of Mormon teaches social justice.  She doesn’t sit in pews a lot of Sundays, but she won’t let go of the truths.  She sees glimpses of God and is not giving up.  She may never come to the pews but Mormonism stays with her and will be in “every pulpit I preach from.”  Yes she preaches from the Book of Mormon.  It is the only sacred texts written for enemies.  Take that!  The Nephites knew they would all destroyed, yet they are doing this for their enemies.  It is written evidence to do right for those who persecute and use you.  “I love the Book or Mormon.  Community stays with me.”

This is her testimony.  “God lives for me.  God know Fatimah by name, tear, and struggle.”  God knows every one of her 4 children and “knows what I need.”  She is grateful for her 24 years of Mormon tradition and for her 13 years in the Islamic tradition.  Bring on truth, light, and God.  We need all of it. Wherever you are, its ok, even if leaving.  God loves us.  May we be good people, be good to each other.  Isolation is hurtful.  Bullied is horrible.  Be good to each other.

Honestly, these 6 testimonies are some of the most powerful testimonies I’ve heard in years.  They are special to me, and I am so grateful I was able to attend these powerful sessions and powerful speakers.  It was truly a blessing to me to be in attendance.