What Should be the LDS Church position on Syria? 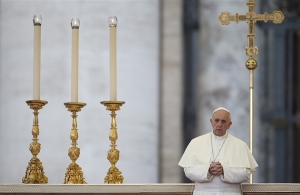 A somber-looking Pope Francis made an impassioned appeal before 100,000 people on Saturday to avert a widening of Syria’s conflict, urging world leaders to pull humanity out of a “spiral of sorrow and death.”

Francis, who two days ago branded a military solution in Syria “a futile pursuit,” led the world’s 1.2 billion Roman Catholics in a global day of prayer and fasting for peace in Syria, the Middle East and the world.

“Violence and war lead only to death, they speak of death! Violence and war are the language of death!” Francis said at the midpoint of a five-hour prayer service. Police and the Vatican estimated a crowd of about 100,000 in St Peter’s Square.

The above excerpt is from an NBC news report.  The LDS Church has supplied $1 million to help with the Syrian refugees, but has been much more silent on the subject of air strikes against Syria.  The Community of Christ offers a yearly peace prize, and is generally quite anti-war.  Back in July, they posted a prayer of peace.

When the Soviet Union invaded Afghanistan back in 1979, we supported Osama bin Ladin in throwing the Soviets out.  (We also supported Saddam Hussein in the Iran-Iraq War.)  Is the U.S. making a similar mistake in Syria?

One comment on “What Should be the LDS Church position on Syria?”