Stuff they don't talk about in Sunday School
9 Comments

Posted by Mormon Heretic on January 19, 2014 in Death, Mormon 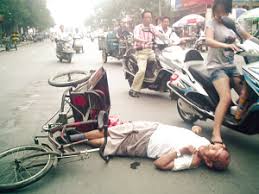 not my dad, but this must be how he looked when he fell

My parents are in their mid-70s.  This past week, my mom called to tell me that my dad fell off his bike and broke his hip.  I became alarmed because, according to this article from the BBC, nearly 1 in 3 elderly patients die within 12 months of a hip fracture.  Another CNN article notes that men have an increased risk of dying from pneumonia or sepsis following a hip fracture.  Needless to say, it got me thinking about not having my parents anymore.

I was going to say that losing your parents is something everyone goes through; however, I have a brother and sister that  never experienced it.  My sister has already died of brain cancer, and my brother died in a car accident.  I remember asking my mom to compare losing a parent with losing a child.  She said that losing a child is worse because you expect to out live your parents, but not your kids.

When my brother died, we spoke to a grief counselor, and she said something that has always remained with me.  Many people say that they would hope to die in their sleep because they don’t want to suffer.  While that is understandable, the grief is much harder to deal with for those left behind. The counselor said that the family never feels they got to say goodbye.  She said it is better to have an extended illness, because it helps the family get used to the idea of death.

Having experienced both, the counselor was right.  I lost my oldest sister 16 years ago.  She had brain cancer for the last 22 months of her life, dying at the age of 36, and leaving behind a husband and 4 young children.  8 years ago, I lost my brother in a car accident.  He was 35, and also left a wife and 4 young children.  The loss of both siblings was profound, and probably took me at least 2 years to fully process.  When my sister died, she had been very sick for a long time.  I took her to radiation therapy every morning for 6 weeks, in hopes of shrinking the tumor.  It didn’t work, and eventually the radiation had damaged both her hearing and her eyesight.  She took steroids to keep the brain swelling down.  Long term use of steroids caused her weight to balloon, and she was in constant pain.  I wanted her to live, but I also didn’t want her to suffer anymore.  Throughout the ordeal, she maintained her faith in God, and I don’t know anyone that handled these challenges better than she did.  Towards the end, I prayed for God to take her suffering away.  I still miss her dearly, but I am glad she no longer suffers.  I was able to hold her hand the night before she died.  It is a bitter sweet memory.

“The thing about goodbyes is that they are rarely for keeps, and we never really know when we are saying goodbye for the last time.  We said goodbye to [him] back in January when he left to pursue other endeavors.  It didn’t feel like goodbye, not until last night.  Sometimes the goodbyes we mean to say just come too late.”

My goodbye consisted of spending a few moments with him in the mortuary.  He died instantly when the vehicle he was driving rolled, and crushed his head.  The mortician put a compression wrap on his face to keep the swelling down, and took it off for me to view him.  My brother looked pretty good for his condition.  However, his face swelled up for the funeral, (I didn’t know that happens after death), and most people didn’t recognize him and his swollen face (even his wife moaned “It’s not him!”)  I guess I got to see him at his best in the days that followed his death; I count that as a small blessing of my goodbye to him.

My brother’s wife and children were severely injured in the accident, so I was tasked to find a grave for my brother.  Because I had visited my sister’s grave many times, I wanted to find a spot near a tree.  (I wish my sister had a tree to shade her grave.)  My brother’s wife has remarked how nice it is to sit under the tree when they visit my brother’s grave.  I won’t need to find a grave for my parents.  Not only have they already picked a grave, they have a headstone.  Strangely, someone decorated it on Memorial Day last year.  I hope that wasn’t foreshadowing something.

Losing your parents is something most people will face.  I do not look forward to it, but the alternative (me dying first) is even less palatable.  When my dad dies, who am I supposed to call for advice on a plumbing problem, or why can’t I start my car when the battery is fully charged?  I used to call my sister for dating advice.  Perhaps she helped me find my wife, because I was married within about 2 years of her death.   I can’t call my brother any more to talk about the great game last night, but I do feel like he watches over me now.  I’d still prefer to call him on the phone, but I guess I must be optimistic that this is the best it will be.  I think about my brother and sister every day.  I do look forward to the resurrection so we can be reunited.

I don’t know how many of you have seen the movie “Waking Ned Devine.” It’s an Irish film available on Netflix, and very funny. I highly recommend it. It’s a comedy about a small Irish town in which an old man wins the lottery. He was so excited, that he had a heart attack and died. The townspeople decide to impersonate him and keep the money. It’s really quite funny, but at the end is a very touching part. Just as one of the townspeople gets up to give the eulogy of Ned Devine, a person from the lottery commission comes in. The person impersonating Ned Devine was Mike O’Sullivan, so the eulogy ends up being about Mike, who is seated on the front row.

Michael O’Sullivan is my greatest friend. But I don’t ever remember telling him that. The words that are spoken at a funeral, are spoken too late for the man that is dead. What a wonderful thing it would be to visit your own funeral. To sit at the front and hear what was said, maybe to say a few things yourself. Michael and I grew old together. But at times, when we laughed, we grew younger. If he was here now, if he could hear what I say, I’d congratulate him on being a great man, and thank him for being a friend.

What are your thoughts?

← Vote Me for a Wheaties Award!
Mitt: the Documentary →

9 comments on “Facing your Parents Mortality”