Stuff they don't talk about in Sunday School
7 Comments

A federal judge Friday struck down Utah’s voter-approved constitutional amendment — which defines marriage as the union of one man and one woman — finding that it violates rights to due process and equal protection as set forth in the 14th Amendment to the U.S. Constitution.

The Utah Attorney General’s Office said it would seek an “emergency stay pending the filing of an appeal.” The office filed a notice of appeal in U.S. District Court late Friday.
Read more at http://www.ksl.com/?nid=148&sid=28099570#f2mbRWbSeOQbBKsO.99

Earlier in the week, a federal judge overturned Utah’s co-habitation laws designed to criminalize polygamy.  This from the Salt Lake Tribune: 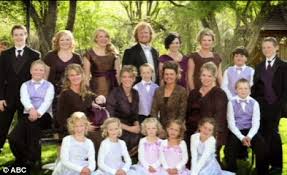 Judge Clark Waddoups’ 91-page ruling, issued Friday, sets a new legal precedent in Utah, effectively decriminalizing polygamy. It is the latest development in a lawsuit filed by the family of Kody Brown, who became famous while starring in cable TV channel TLC’s reality series “Sister Wives.” The show entered a fourth season at the end of the summer.

It was definitely a tough week for traditional marriage.  Comments?