Stuff they don't talk about in Sunday School
8 Comments 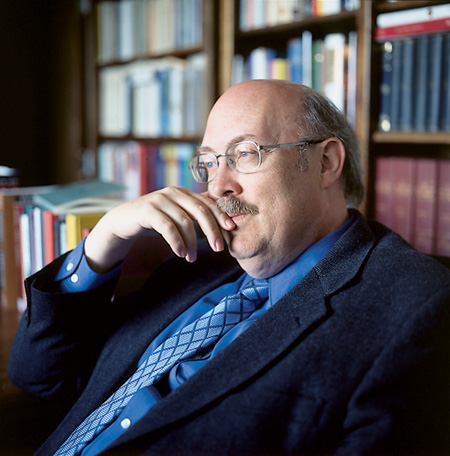 Dan Wotherspoon put together a 4 hour interview with BYU Professor Daniel Peterson on a variety of topics.  It is available on the Mormon Stories Website or at iTunes.  I really enjoyed the interview, and decided to create a transcript for part 3 where Peterson talked about his (futile) experience trying to improve the church manuals.  On Part 3 at the 34:48 mark:

Dan Wotherspoon, “I sense that there has to be some level of frustration at times with for instance, FARMS has been doing all this work for 25 years.  We have the Limited Geography thing.  That message is not getting out to CES. We still have kids that are coming through seminary and then they’re going to hit this wall.  So inoculation isn’t happening.

Wotherspoon, “Talk more about that.”

Peterson, “Well, we’ve talked already about the fact that I wish church history were taught better than it is. I served for 8 or 9 years on the Gospel Doctrine Writing Committee for the church, and I remember when I was called (by George P. Lee by the way), I said ‘I’m not sure I’m the person you want because I don’t like the church’s manuals very much.’  [Lee said], ‘You’re just the person we want because we want to improve them.’  Well, when I got onto the committee, in fact, there wasn’t much we could do.  We were constrained within certain limits.”

Wotherspoon, “Was it Correlation Committee or was it certain personalities that had?”

Peterson, “I was never clear.  I think it was Correlation, I think it was the Curriculum Committee.  They would lay out certain things about the way they wanted us to do it.  For example, we were doing the Old Testament one year and we wanted to put in some historical background.  People can’t make sense of this if they don’t know what’s going on.  I think a big aid to understanding Isaiah is to understand the politics of his day. Isaiah and Jeremiah were reacting to great power politics, and if you don’t know any of that, you can’t make any sense of it.  A lot of it is talking about their day.

We tried to put some of that in and we were rebuked by someone, some nameless bureaucrat up in Salt Lake who said, ‘you’re just trying to show off.’  I thought ‘How?  We’re anonymous.  Who would know?  We’re just trying to help people out there by saying, look: one paragraph.

The Assyrians were doing this, the Egyptians were doing that, Israel was caught in between.  Isaiah is warning against x, y, and z. Half the passages make sense once you know that.  It doesn’t take a lot to make sense of those passages, but we weren’t allowed to do it.  We went through a period where we were allowed only to have bullet points, scriptural references, and Life Applicational questions.

I remember some of mine I had put in jokes sometimes.  We all did.  [We would] come and discuss on Sunday morning, [and] critique each other’s proposed lessons.  Mine was Life Applicational Questions.  ‘Do you think it would be a good idea to be a wicked Judahite king? What steps can you take toward this?’

My favorite was one that I actually told on numerous occasions where they really wanted Life Applications and no history.  I was doing the passage in Acts where you have Uticus up in the rafters at Troas.  Paul drones on and on so long that he falls asleep, and falls out of the rafters. He’s taken up dead it says and Paul has to restore him to life.  So I thought, ‘Alright, have a class member read Acts–whatever the passage is.  Now, have you ever killed anyone with a Sacrament Meeting speech?  How did it make you feel?  What steps could you take in the future to avoid this?’  The funny thing is that it passed Correlation.

Wotherspoon, “That part did?” [chuckling]

Peterson, “It did, I can only assume that people chuckled at every point and it made it.  When I saw the final draft, final gallies, it was still there!”

Peterson, “I went through a real crisis of conscience there.  I thought, ‘I would love to see this go into the manual! But I finally called them and said, ‘I’m not sure that you’d want that particular bundle of questions there.’  [and they said] ‘Oh good grief! good grief! We’ll take it out!  We’ll take it out!’  And I thought ‘it would have been great to see that in Tagalog, Chinese, German, and Spanish all around the world.”

Some of our manuals I think are not very good.  They’re not very deep. I understand the danger.  I think if you allow people to simply go wild, you’ll get some really weird Gospel Doctrine classes out there with people grinding their own axes and having little hobbies, teaching false doctrine, and so I understand the need to sort of reign people in, but on the other hand, the lessons can be really, really pablum and boring.

Wotherspoon, “And completely without any context–no link to context.”

Peterson, “Yeah, and I love to give historical context and background.  I don’t care if it’s Doctrine and Covenants, Old Testament, whatever.  Right now I’m back into teaching Gospel Doctrine, which is my favorite position in the church. I mean I love it!  I just have a lot of fun with it. But I remember once, I had a letter once when I was serving on that committee that exempted me from all local callings, which was something that I treasured.

I remember being called in once by the stake presidency and they’re all sitting there and they had me and my wife come in and it was obvious they were up to something.  The stake president said, ‘I understand–I was just told that you’ve got some sort of letter from the brethren?’  I said, ‘YES!  I do.  Here it is!'”

Wotherspoon, “In other words, we’re using up enough of his time that–

Peterson, “Yep.  Because we met every 2 weeks for 2 or 3 hours every Sunday morning to critique each other’s lessons, and so on.  It was a lot of time involved in that, so that was my church calling for a long time, except I did teach gospel doctrine in my home ward–that I was willing to do because I love it! Now if it had been Scoutmaster, I would have said I’m sorry, I’d love to do it but I can’t.

Well then, at one point the stake Sunday School president came into my Gospel Doctrine class and he sat through the whole thing.  My lessons still is the way I teach them.  I look at the lesson to see what the passages are that I’m supposed to teach, then I put it away.  I mean I mean to read it, but I don’t.  I never do.  Then I read the passages, and then I comment on them and come up with what I think is the theme of the passage and try to give a historical background and so on.

Well this guy sat through my lesson and came up afterward and rebuked me, that I wasn’t using the Gospel Doctrine manual. Did I not realize that these were given by revelation and so on and so forth?  [I responded] Well, you should know that I’m on the committee that writes them, and I don’t like them at all.

So, that would be one of my complaints about church practice.  I would love to see better teaching.  I don’t know if we’re capable of it in a typical ward.  Maybe this is the best we can do and those manuals are necessary.  But there are some places where there are really superb teachers, and I hope they’re not constrained by the manual.”

Wotherspoon, “Yeah I hate that fact that the manual mentions no outside sources and some people take that so seriously that people do feel constrained.”

Peterson, “I understand the danger. I’ve been in some pretty weird lessons where people were using it to teach some bizarre form of politics or just plain false doctrine, bizarre racial theories, and things like that so maybe without those manuals, we’d sink to a lower level.  But still, I’d like to see us do better.  I’d like to see us teach our history better.  That is a concern we’ve already mentioned.  I think it does us damage when our people grow up and hear about things that could have been conveyed to them in a faith promoting way.

Even Mountain Meadows, I think can be conveyed in a faith promoting way.  I think it’s a lesson to us about the fallen nature of human beings, and how even good people can get sucked into doing bad things.  I would love to teach a Gospel Doctrine lesson on the Mountain Meadows Massacre.”

I’d love to hear that lesson.  How about you?

← Dimensions of Faith: Conflating Cain with Bigfoot
Looking at the Spaulding Manuscript →